Severe mental trauma can be passed down across generations through chemical modifications of genes, according to a study that analyzed the DNA sequences of ethnic Tutsi women who were pregnant during the 1994 genocide in Rwanda and their children.

The research, published recently in the Epigenomics journal, compared these samples to those taken from Tutsi women and their offspring who were living elsewhere around the world during the ethnic cleansing that saw an estimated 800,000 Tutsis killed by Hutu extremists over a 100-day period.

A team of scientists from the University of South Florida and the University of Rwanda identified chemical “epigenetic” alterations to the DNA in the pregnant survivors. These changes – which do not damage genes, but modify how they function – were observed in genes that have been linked to a risk for mental health conditions like depression and post-traumatic stress disorder (PTSD).

The same signatures were also found in the survivors’ children, unborn at the time, indicating the changes had been passed down from their mothers. These findings suggest that such inter-generational chemical modifications “can happen in a shorter time frame” as a response to traumatic events – unlike genetic mutations that alter the “underlying DNA sequence of genes.” 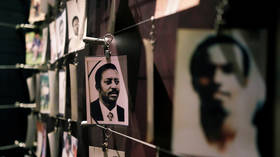 Inter-generational trauma that is inherited as genetic changes in a person’s DNA has previously been observed among survivors of the Holocaust and their children as well as ordinary people who have suffered abuse, poverty and harrowing experiences, the Daily Mail reported. The researchers said many symptoms of this trauma do not appear until later in life.

While the researchers compared DNA from 59 people during the study, they are now waiting for a larger batch of samples to examine links to specific mental health disorders like PTSD. As well, they hope to test whether the epigenetic effects have been passed onto a third generation.

“The Rwandan people who are in this study and community as a whole really want to know what happened to them because there’s a lot of PTSD and other mental health disorders in Rwanda and people want answers as to why they’re experiencing these feelings and having these issues,” researcher Derek Wildman said.