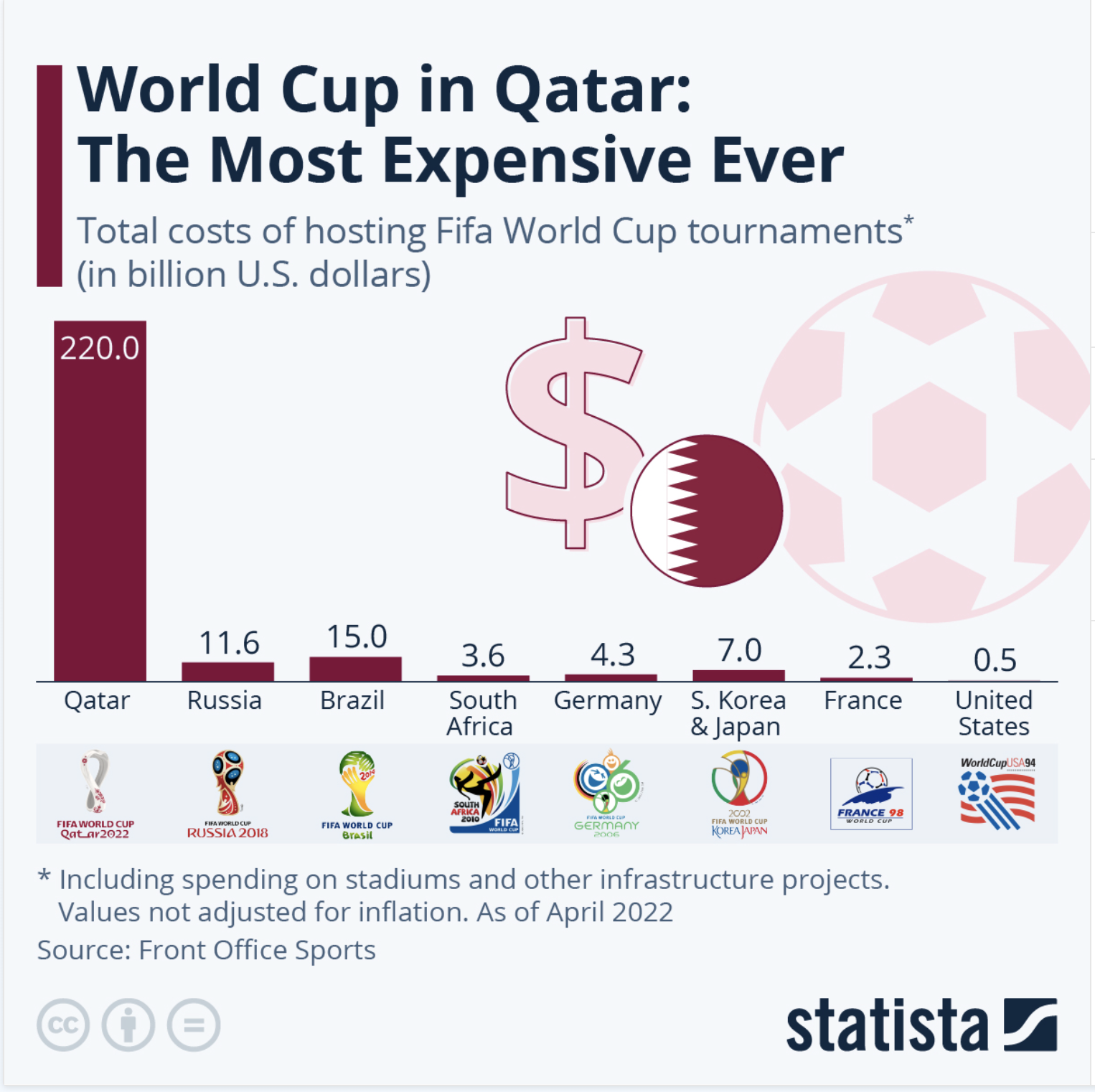 The FIFA World Cup Qatar 2022 will bring the tournament to the Middle East region for the first time in its history.

This year’s World Cup, which is set to begin in November, will be the most expensive FIFA tournament in history, costing  $220 billion, almost 20 times what Russia spent in 2018.

Ever since Qatar was awarded the bid to host the World Cup in 2010, the Gulf state has been building monuments that will accommodate an anticipated 1.5 million visitors at the region’s first ever World Cup.

The huge increase in costs is partly attributed to new World Cup stadiums and infrastructures, according to recent reports.

On the contrary, the costs of the 2006 World Cup in Germany  appear almost insignificant at $4.3 billion.

The previous highest budget was the $15billion spent by Brazil in 2014, while South Africa coughed out $3.6 billion four years prior.

So what exactly makes Qatar different?

The building of stadiums cost around $6.5 billion to $10 billion, and the remaining bulk of $220 billion was used as part of the broader Qatar 2030 National plan, which centres around developing infrastructure, including  construction of an innovation centre with hotels, a sophisticated metro network, and airports.

“The World Cup is a part of the Qatar National Vision 2030, a broader government strategy promoting the intensive development of urban and national facilities and industry, in addition to education and healthcare systems,” Fatma Al Nuaimi, Communications Executive Director for the tournament, told The Sun, stressing that that these three developments were all part of Qatar’s wider vision for life after the World Cup.

“Most of these large-scale infrastructure projects, which will be used by teams and fans in 2022, such as new roads, a subway, an airport, hotels and other tourist facilities were planned even before we obtained the right to host the World Cup.”

The development of the country’s infrastructure and transportation systems, the largest of which is the Doha Metro, required a significant amount of investment.

The massive underground transportation network, which opened in 2019, cost about $36 billion to build and is anticipated to be essential for supporters who want to travel quickly throughout the city during the tournament.

Another crucial component was the multi award-winning Hamad International Airport. The country has since spent $16 billion developing it since it first opened in 2014.  Meanwhile, the new Lusail City construction has consumed a significant portion of Qatar’s $220 billion in spending.

The Qatar National Vision 2030 project was unveiled a little earlier in 2008. Its goal was to transform the nation into an “advanced society capable of sustaining its development and providing a high standard of living for its people.” Sports would be one of the main pillars of this future.

Since then, Qatar has hosted more than 600 regional and international athletic events over the past decade, and these competitions, in particular, have helped the country prepare for the FIFA World Cup. Ahead of the major tournament, stadiums and practice fields are ready and undergoing testing with numerous events, according to recent reports.

However, the World Cup in Qatar has come under international criticism not only for its high cost, but for human rights violations and mistreatment of migrant workers.

One such report was published by The Guardian in February this year headlined, “Revealed: 6,500 migrant workers have died in Qatar as it gears up for World Cup” in which it linked the “shocking” death rate to the start of the World Cup journey a decade ago.

However, the report failed to clarify the reasons behind the deaths and was quickly dismissed by Qatar as “baseless.”

In response, Qatar’s Supreme Committee has noted that a total of 35 workers have died on World Cup projects it has supervised since 2015. However, there is no estimate of how many workers had died on other infrastructure projects related to the staging of the tournament.

In addition, foreign fans and Qatar residents have also complained about the lack of affordable housing during the World Cup, with some considering leaving the country or staying in neighbouring countries like Saudi Arabia, the United Arab Emirates, Oman and Kuwait.

As the World Cup approaches in less than two months, residents in the Gulf state have reportedly been served with eviction notices, asked to sign either short-term lease agreements or 24-month lease agreements or even had their rent significantly increased.

The average monthly price of offered Airbnb rentals in Qatar for a stay during the World Cup has reached $72,396.

Over the last decade, Qatar has seen a number of historic labour reforms. In 2021, the country introduced the region’s first ever non-discriminatory minimum wage law, triggering praise worldwide.

Doha also launched a new platform for workers’ complaints in May 2021 to enable employees to submit public violations of the labour law.

More than 2,000 labour complaints were filed with the Ministry of Labour against firms and institutions across the country in December.

However, in recent months, there has been a slew of new complaints about working hours, compensation, and a variety of other issues. Some workers who spoke to Doha News say they have received no response despite filing complaints.

Separately, Qatar’s Wage Protection System, which requires companies to transmit all payments through Qatari banks within seven days of their due date, is now said to cover over 96% of eligible workers in Qatar.

In a statement sent to Doha News, a Qatari government official said the Workers’ Support and Insurance Fund has disbursed almost QAR 600m to over 36,000 workers in Qatar since its emancipation in 2018 and up until the end of 2021.

The fund was established in 2018 to pay out compensation granted by Labour Dispute Settlement Committees when a firm goes bankrupt and is unable to pay its employees. This comes as international NGOs and human rights organisations demand that Qatar and FIFA compensate the workers who were on World Cup projects.

Companies in Qatar are legally required to compensate the families of all workers who die in a work-related incident. Immediately after a work-related death occurs, the company is required to report the incident through a dedicated electronic system. An investigation is then carried out by the authorities to identify the cause of death and determine whether adequate health and safety measures were in place.

If a violation occurred, legal action is taken against the company. Once the cause of death is identified as work-related, a final report is submitted to the legal authorities to determine the amount of compensation to be paid by the company to the family.

This decision is immediately enforceable under Qatari law.

Additional reform includes two key laws to eliminate barriers on migrant workers leaving the country and changing jobs without permission from their employers.

The new laws have the potential to strike at the core of the Kafala system, which continues to link migrant workers to their employers, if effectively implemented. However, there are numerous reported cases of employers not abiding by the reforms.

Qatar’s Minister of Labour Ali Al Marri recently stated that the legislative updates and improvements in the labour sector in recent years have been “continuous and sustainable” and will continue after the World Cup.

Speaking at a panel in Geneva this week, FIFA President Gianni Infantino said: “Thanks to the spotlight of football, as well, many things have changed in Qatar”.

“I am happy to take all the criticism of everyone for everything, doesn’t matter, as long we can have a little, little concrete and real positive impact.”

Highlighting the transformative nature of football, Infantino said: “In Qatar, for example, in terms of, of workers’ rights, of human rights. Things have still to change. But a process has started and people are much better now than how they were before,” he said.

Qatar’s major transformation since winning the bid for the FIFA World Cup 2022 has been carried out in just a few years, FIFA President Gianni Infantino said in June at the Qatar Economic Forum in Doha, noting such moves took hundreds of years in Europe.

“It took us in Europe hundreds of years to arrive where we are now […] in this part of the world, in Qatar, it has been done in a few years so it’s clear that at the beginning we need some time to assess it.”

The FIFA president noted the World Cup in Qatar served as an opportunity for change in the country, though he said he believes “progress would have been done anyway”.